Halloween approaches – the season of spiders, ghouls and the living dead. It is also the season in which pigs rummage for truffles in the woods, and licensing lawyers (myself among them) rummage through the pages of the latest editions of “The Legal 500” and “Chambers Directory” for quotations to put on our websites. 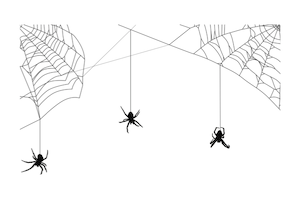 Oh, what a Tangled Web!

Selective citation is but one of the questionable practices of intricately spun websites: I recently discovered that one can employ copywriters to write and publish specially written articles, week by week, buried so deep in the website that the chances of anyone reading them are remote; articles with carefully chosen (and repeated) words and phrases calculated to improve the Google ranking of the site.

Of course everyone wants their website to be read – and that requires it to show up on a Google search. But I have some concerns as to whether the current techniques for improving search engine ranking are drifting into the unethical. So that the reader may judge the matter for himself/herself I have set out below: (1) my IOL article of March 2017; and (2) by way of contrast the suggested text for a ghosted article to be posted in my name (it wont!), provided to me by an SEO  service.

We are in a particularly benign season: the slaughter of pheasant and partridge has been put on hold until the autumn; Valentine’s Day promotes the sending of cards, flowers and gifts to loved ones (but woe betide him who forgets, or who sends only balloons); and legal directories invite us to sing each others’ praises, for later publication in journals of inestimable importance. All is not perfect, however. Rumours abound (though I am certain they are fake-news) of pacts between barristers and solicitors, mutually to wax lyrical about each other. A dangerous arrangement, should it exist. If even only a half-decent accolade were given by the barrister who received in exchange “he prepares his cases well”, then he must surely have an action in breach of contract, if not defamation. There is also, if I may say so, something rather gross in the annual launch of these directories, when lawyers of all descriptions can be seen, like so many Gollums, clutching the precious books to their hearts. But it is what happens next that I find truly unpalatable, and which spurs me to write this article: the most extravagant and exaggerated praise that can be culled from the various reviews is cut-and-paste into the lawyers’ self-congratulatory web sites – with their endless lists of testimonials, and pop-down menus, and links to yet more of the same.

Theatre audiences learnt long ago to look askance at billboards that shout enthusiastic praise. Famously in the 60’s a hostile review of “The Student Prince” ended with the sardonic sentence: “A lone voice from the gallery cried ‘This is what we want’”. Thereafter, and for the run of the show, a billboard outside the box-office quoted the critic as saying “This is What We Want!” More recently, the Daily Telegraph compared a stage adaptation of “The Shawshank Redemption” unfavourably with the original. The review described the film as “a superbly gripping, genuinely uplifting prison drama”, but said the play was “inferior in almost every respect.” The billboard outside Wyndhams Theatre lifted the praise for the film, and quoted it as though it applied to the play.

The EU stepped up to the plate as long ago as 2006, in an attempt to curb these and similarly reprehensible (albeit amusing) excesses in self-promotion. Directive 2006/114/EC militates against misleading and comparative marketing practises. It applies not just to theatre billboards, but a fortiori to lawyers’ websites and news flashes; but to judge from the tsunami of such material that has flooded my computer screen in the last twelve months, there is no great appetite for enforcement of the Directive against over-boastful lawyers.

Michael Wolkind QC, however, came under fire last month for the content of his website. The Bar Standards Board found that he had “behaved in a way likely to diminish the trust and confidence which the public placed in him or in the profession in that his website contained the statement that [he] was widely recognised as the UK’s top murder barrister…” The phrases “widely recognised” and “widely regarded” are so imprecise as to be invulnerable to effective challenge. Perhaps for that reason their use is ever more widespread – to the point where some areas of legal expertise seem able to accommodate a significant number of practitioners, every one of whom is “widely regarded” as the leader.

In an earlier criminal appeal (2015), Lord Thomas CJ commented that Mr. Wolkind’s website surprised him as to its “content and tone”. Criticism of the website’s tone is important: it is a stand-alone complaint, independent of whether the content is misleading or false.

I have a good deal of sympathy for Michael Wolkind: he has said that he was introduced to self-promotion on the Web by an old school friend who had computer expertise; and it is easy to see how things could get out of control under the proselytising encouragement of an IT evangelist. Wolkind has accepted that he had been “too enthusiastic” and “praised [himself] too much”. His soul-searching sets an example to any of us who have fallen into the temptation of lifting single sentences from The Legal 500 and Chambers Directory, and piling them one upon another in a shameless gush of hyperbole. I plead guilty to having trespassed into that territory in my youth (or possibly later). I desisted after a short experimental period in which I became increasingly uneasy about surrendering my self-respect to self-promotion.

It is not only the purple-prose website that brings our profession into disrepute, but also the selective ‘news-flash’, presenting an indifferent or even bad result as though it were a stellar victory, or heralding a wayward magistrates’ court decision as though it were Supreme Court authority. To have resisted the revocation of a premise licence on a review brought by the police may look impressive in an Internet ‘blog’ – but only if certain details are held back from publication, e.g. that the licence was made subject to commercially crippling conditions, or the premises were sold at a knock-down price the day after the hearing.

Lawyers can hardly be said to hold an enviable position in the public esteem: regard for us sometimes comes uncomfortably close to contempt. These slick and ever-more unseemly websites and newsflashes sink us even lower; and whilst they may encourage a little short-term trade, in time they will defeat their own purpose, being universally untrusted and ignored.

“Do you want to work with an excellent licensing lawyer in London? You should contact … I am a committed, experienced, industry expert that can provide you with exceptional professional services, so you know I’m the best person to work with. I’m known for excellence in advocacy and administrative assistance and I’m even recognised by the Chambers and Partners and the Legal 500 as one of the country’s leading sets of specialist licensing barristers.

I have an excellent customer service reputation, which is something I am very proud of. As the best licensing lawyer in London, I always aim to understand the needs and ambitions of my clients so these can be fulfilled through a comprehensive, attentive and consistent service. I always combine my extensive experience with a flair for advocacy in order to achieve the very best results for my clients. I am a leading licensing barrister that advises and appears in court for applicants and objectors, resident’s associations, local authorities and the police.

As the best licensing lawyer in London, I’m known to give the best straightforward, practical advice and support that you need. I always aim to charge the most reasonable fees that still provide you with the results you desire. I like to understand all of your licensing requirements which enables me to give you a realistic quote, with no hidden numbers. I’m also incredibly experienced in magistrates’ courts, the Crown Court, the High Court and the Court of Appeal, so you know I am the best licensing lawyer in Essex for you to contact.

I cannot help but wonder if any self-respecting licensing lawyer would allow such unashamed self-promotion to go out in their name – it might even result in a disciplinary hearing before the Bar Council! But if the text is designed to be hidden from the public gaze, I suppose it is just possible that some have fallen into temptation. It is, after all, unlikely that I am the only person with a website who has been offered these or similar SEO services.

As Hamlet said: “That it should come to this!”