Over the last few days an allegation of the utmost seriousness has dominated my Twitter feed: it is repeatedly claimed that the Democrats’ impeachment managers doctored evidence in the trial of President Trump.

Twitter is not the ideal forum for reasoned discussion, nor is it a wholly reliable source of the truth; and the truth has been particularly difficult to fathom in a saga characterised by intemperate accusation and knee-jerk denial. The basic facts of the controversy need to be published somewhere and in a form accessible to the general public – ideally where the text is not limited to 140 characters.

I don’t pretend to have accomplished that task satisfactorily, but what I have gleaned so far is set out below, in the hope that any factual error will quickly be corrected. 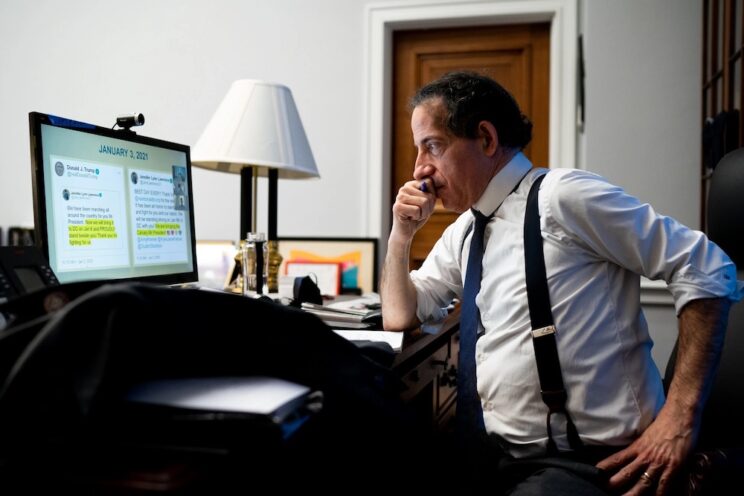 A closeup of the computer screen shows two Tweets, both dated January 3 2020: 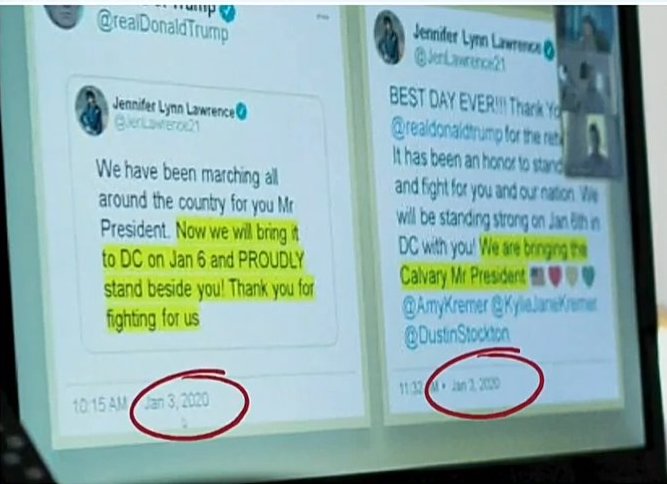 At some point after the Article of Impeachment was delivered to the Senate,  the impeachment managers produced following document:

The text of the Tweets is identical to texts on the computer screen in the NYT article.  The dates, however, are materially different – Jan 3, 2020 has become Jan 3, 2021.

The Twitter timeline for Jennifer Lynn Lawrence confirms that the email exchange did indeed occur on January 3, 2021. It follows that what Sen. Jamie Raskin was looking at on his computer screen was inaccurate.

A number of questions arise:

What was there to be gained?

It is difficult to see what advantage the impeachment managers would have gained in deliberately falsifying the Tweets as having been posted in 2020 rather than 2021.  In his much-publicised CBS interview, Michael van Der Veen seemed to suggest that altering the year implicated president Trump more immediately in the insurrection than he would otherwise have been:  but surely that would only be so if an old Twitter exchange had falsely been presented as a recent one? Taking Tweets posted three days before the insurrection and claiming that the exchange took place a year earlier would distance President Trump from the events of 6 January rather than implicate him more closely in them.

A blue badge against a Twitter account name is a verification by Twitter that the account is authentic: there is no way, currently, for individuals to apply for verification.  Twitter say that there are six types of account which they verify: Government; Companies, brands and non-profit organisations; News organisations and journalists; Entertainment; Sports and e-Sports; Activists, organisations and other influential individuals.

Jennifer Lynn Lawrence’s account was not verified by Twitter. It is incontestable that adding a blue ‘verification’ badge to her name gave her Tweet a significance which it did not have.

It may be thought a trifling thing; but to claim, falsely, that her account was verified by Twitter, in order to give the exchange with President Trump more significance, would to my mind be a serious matter. No cogent explanation has been given. The addition of the blue badge needed to be done quite deliberately, probably by cutting and pasting it from somewhere else. It is unlikely to have been accidental.

The impeachment managers played an edited video of President Trump’s speech, and in oral argument relied on one passage in particular:

The defence – with some justification – complained bitterly that the edited video was misleading because it omitted another passage, in which Trump had said:

“I know that everyone here will soon be marching over to the Capitol building to peacefully and patriotically make your voices heard.”

Although the omission was easily corrected, it was nonetheless wrong for the Democrats to edit-out such an important sentence. It is immaterial that they did not, in doing so, violate House Rules (1): there could have been no other motive than to make their case look stronger than in truth it was – even if the impact was transient. Not only was it, to my mind,  manifestly wrong, it was poor advocacy: their conduct did nothing to allay the suspicions of concerned Republicans as to what lay behind the other anomalies in their presentation.

The issues discussed above  have fomented allegations one would not expect to be made as to the conduct of a Senate impeachment trial. There are, of course, two sides to this as there are to any other story. It would greatly assist those of us who would like to understand the rights and wrongs of the controversy if the agreed and disputed facts were set out in one place, and the opposing arguments were more reasoned and less ad hominem.