This week the Times and other newspapers reported:

“Limits on the sale of alcohol at airports are being considered after the number of air rage incidents on British flights doubled. Ministers are proposing to close a loophole that allows airside pubs and bars to operate outside licensing laws in order to cut the number of drunken passengers causing havoc at terminals, The Times has learnt. The Home Office is planning to extend the Licensing Act 2003 to cover alcohol being sold to passengers just before they board flights.” 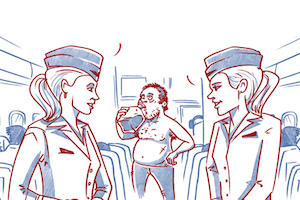 Drunken passengers on aeroplanes are a nuisance – and at times a danger – to everyone else on board. Last October the violent outburst of a drunken woman on a flight from Manchester to Mexico caused the plane to be diverted to Canada, where it made an emergency landing. The woman was charged with jeopardising the safety of an aircraft and given a 20 day prison sentence by a Quebec court. The previous year a drunken British stag party forced a Ryanair flight from London to Bratislava to divert to Berlin, where police took the group off the plane. A Jet2 passenger was jailed for seven months in January last year, after taking control of a plane’s intercom system, while drunk, in order to demand more alcohol during a flight from Manchester to Tenerife.

Those are the more serious occurrences; but there is no shortage of lesser incidents. The Civil Aviation Authority reported a 600% increase in disruptive passenger incidents in the UK between 2012 and 2016 with “most involving alcohol”. Reports of alcohol-fuelled disorder on flights out of the UK, abuse of cabin crew, thefts of alcohol from the galley, etc., etc., have become so commonplace as almost to de-sensitise us to them: we expect to hear about drunken stag and hen parties causing disturbances on aeroplanes, just as we expect alcohol-fuelled crime and disorder on our streets every weekend. It has become so familiar, we even have an expression for it: “air-rage”.

The Chief Executive of Airlines UK, Tim Alderslade, has said that “All the evidence [shows] that this is a problem that is only getting worse”.

So how did it come about?

Airport bars and pubs that are ‘airside’ – i.e. the side after passport control and security checks – are unregulated by the Licensing Act 2003. This is not because of a “legal loophole” (as newspaper and television reports have claimed) but because section 173 of the Licensing Act specifically provides that any activity (which includes the sale of alcohol) taking place airside at ‘designated airports’ is not a licensable activity within the Act. All of our international airports have been designated.

The expressed reasoning behind what many regard as an unjustifiable anomaly has changed over the years. In 2010 a Home Office spokesman said that airside pubs were exempt from licensing controls because it was assumed that drinkers would not linger on the premises long enough to cause any problems. Abandoning that unpromising train of thought, in its written evidence to the House of Lords Select Committee on the Licensing Act (2016) the Home Office said –

“The exemption of premises serving alcohol airside from the licensing system is one of practicality. Airside access is tightly controlled. In order for the licensing system to be upheld, licences awarded to airside bars or restaurants must be capable of being inspected, if necessary through spot-checks as local authorities and the police consider appropriate.”

Neither explanation survives scrutiny. Clearly, the Home Office spokesman in 2010 had never suffered a delayed flight; and more recently Sarah Newton MP, again for the Home Office, could not explain why access by licensing authority inspectors should be an insurmountable problem, bearing in mind that access by an army of ground-staff is obviously not. She was unable to give a cogent response to questions from the House of Lords Committee. The Committee Report (April 2016) states –

“We put to her the point that airside access, though tightly controlled, can allow the access of large numbers of other staff, including the staff who sell the alcohol unregulated; and we challenged her repeatedly to explain why the Act should not apply airside. She could only reply that the [UK Aviation Industry Code of Practice on Disruptive Passenger] was ‘effective’ and ‘a better way of dealing with the problems’.”

– which, of course, was no answer at all to the question she was being asked.

Repeal of the exemption

It is difficult to find any good reason why sales of alcohol airside at international airports should continue to be exempt from regulation by the 2003 Licensing Act. Even the ALMR (Association of Licensed Multiple Retailers) agrees that the exemption should go. The Aviation Industry Code of Practice, so heavily relied on by the Home Office, is a poor substitute: it doesn’t even address the soaring problem of underage sales of alcohol at airside bars, as exposed by the Sussex Police as long ago as 2010.

Nor is there any good reason for delay in repealing the exemption. Primary legislation would not be necessary: all that needs be done is for an Order to be made under section 173(5) of the Licensing Act for the designation of airports to “cease to have effect”. The repeal could be effected so easily, at the stroke of a pen, it is no wonder that the Select Committee said it hoped to see the Licensing Act 2003 applying airside by the end of 2017.

A Home Office source is reported as saying that the department would be asking for evidence later this year to assess the potential impact of implementing the Licensing Act on airport bars, with a view to reducing the rate of alcohol-related disorder. One wonders what more evidence the Home Office needs, in order to justify the simple repeal of the airport exemption?

We seem to be going round in circles: in July 2016 the newly appointed aviation minister (now Lord Ahmad) told the BBC that he was considering “a crackdown on the sale of alcohol at British airports” amid a spate of incidents involving drunk passengers. His particular focus, so he said, was the fact that airport pubs, bars and restaurants can sell alcohol 24 hours a day because they are not subject to licensing laws.

Life imitates art. The repeated ‘kicking into the long grass’ of what is a very simple solution to a rather serious problem, and the promises of “looking into it” and “considering it” and “consulting on it” – could inspire a script for an episode of “Yes Minister”.